According to the National Coffee Association’s annual report on National Coffee Consumption trends, Hispanic Americans drink the most coffee of any ethnic group in the U.S. – and rising steadily each year. Coffee has been integral to both Latin America’s economy and the U.S.’s Latinx culture, but the story of how coffee steeped its way into the consciousness might surprise even the most avid drinker.

Given that coffee roasting has been around for centuries, there’s no way to be certain exactly how it began, but that hasn’t stopped creative thinkers from brewing fun origin stories about roasting and coffee’s migration: think dancing goats in modern day Ethiopia and clandestine missions to fend off pirates. While we can’t verify the veracity of the many claims, what we know for certain is that when coffee beans made their way to the Caribbean around the 18th century, they spread through Latin America faster than spilt milk.

Brazil just knocks the rest of the world out of the picture.

“In the first part of the 19th century coffee growing began to accelerate in Brazil,” Jonathan Morris, author of “Coffee: A Global History,” explains. “And then, in the second half of the 19th century, Brazil just knocks the rest of the world out of the picture.” By the early to mid-19th century, Brazil alone supplied over half of the world’s coffee and three-quarters of the U.S.’s total imports. Morris continues, “The more and more that there is demand for coffee, the more and more Brazil is able to push back into its interior and convert more land, […] turn it into coffee fields, and coffee production.” And to Brazil’s advantage, the US market was only increasing.

But, it wasn’t just Americans on the mainland that loved the flavors of Latin America during this time period. Gregorio Bustelo, a Spaniard who spent his formative years drinking coffee in the Caribbean, was so inspired he founded Café Bustelo in 1928 after immigrating to the U.S. and settling in New York City’s Spanish Harlem. With a bold flavored, espresso-style coffee bean Café Bustelo quickly became a staple of the increasing Puerto Rican population in New York City and a social connector for Latin American people in the US. With Latinx immigration on the rise throughout the US, Café Bustelo had a built-in and loyal market that expanded as the decades progressed. Proving a little taste of home goes a long way. 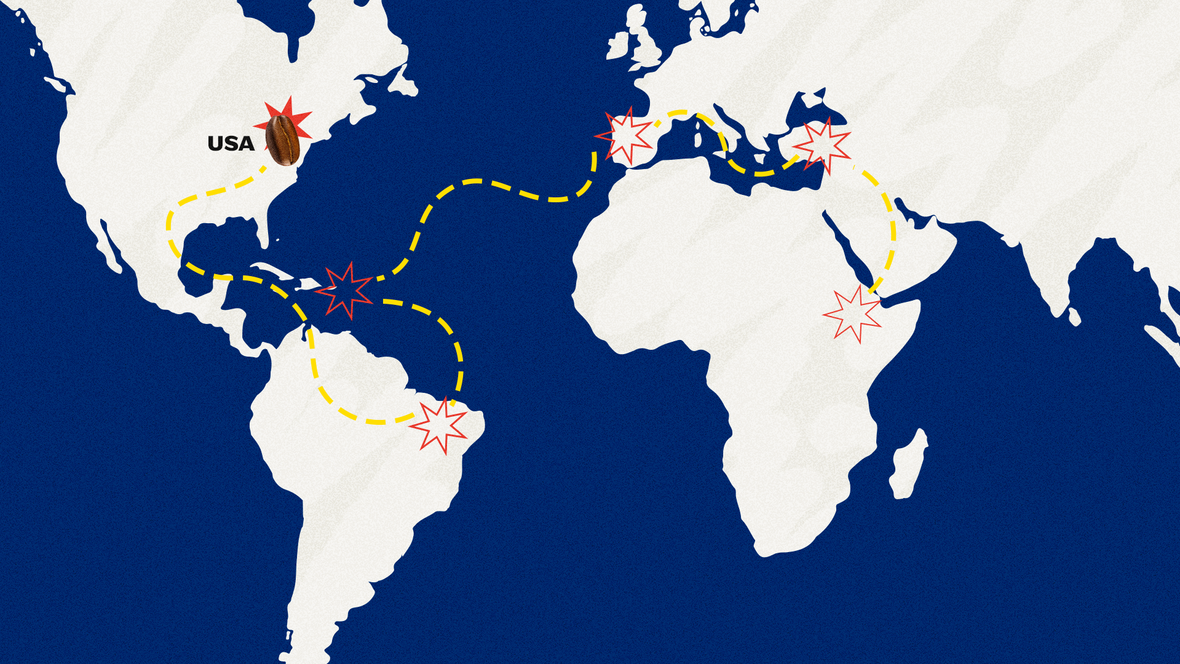 The History of Coffee Traveling the World

By 1970, there were 7.6 million people of Latin American heritage living in the mainland states, an increase of over fifteen times the just under 500,000 census count in 1900. With this increase in immigration came an increase in Latinx-owned businesses. Researcher Inara Tarique explains that today “in the U.S., one in three Latinos are immigrants, but one in two Latinx-owned businesses are immigrant owned. This really suggests that Latino immigrants are more likely to own businesses in the country than their non-immigrant counterparts.”

Coffee, of course, is one of those businesses. Taking a sip out of Café Bustelo’s cup, California is seeing a trend of Latinx entrepreneurs opening specialty coffee shops that implement their Latin American heritage in areas with high Latinx populations. Think Cuba’s cafecito or cortado, Mexico’s café de olla, Puerto Rico’s café con leche, and even new fusions like a horchata latte.

Today, there are over 60 million Latinx people living in the United States with roots from all over Latin America. While there’s no one way to be Latinx, coffee remains a staple in many Latinx households. For the better part of a century, Café Bustelo has offered a flavor of home in a cup, a community in a foreign land, and even a little entrepreneurial inspiration.

+Comments Leave a Comment
How the coffee bean became integral to Latin America.
departures 12:07 a.m.
Trevor Noah Is Leaving The Daily Show After Seven Years “Honestly, I’ve loved hosting the show. It’s been one of my greatest challenges. It’s been one of my greatest joys.”
midnights era 12:03 a.m.
Wait, Is Taylor Swift Just Giving Us Straight Answers? Not like the videogame. Or maybe exactly like the video game?!
into the ramy-verse Yesterday at 11:13 p.m.
Ramy Regrets Ramy-ifying His Character’s Name A Ramy by any other name would be just as funny.
trailer mix Yesterday at 10:12 p.m.
Doctor Florence Pugh Will See You Now in The Wonder Pugh will star in a new period piece set in 1862’s Ireland.
overnights Yesterday at 10:01 p.m.
Monarch Recap: A Boy and His Bull Luke wanted to impress his father by being good at bull-riding, but everyone involved is better suited to be a rodeo clown.
trailer mix Yesterday at 7:16 p.m.
Danielle Deadwyler Transforms Into Mamie Till-Mobley in New Till Trailer Recounting Emmett Till’s lynching at the hands of racist Mississippians and his mother’s fight for justice.
crane family reunion Yesterday at 6:14 p.m.
He’s Still Listening: Frasier Is Getting a Paramount+ Revival The multi-cam spinoff has been officially ordered to series.
the law Yesterday at 6:05 p.m.
Brad Pitt and Angelina Jolie’s Expensive Lawsuit Over Cheap Rosé, Explained Jolie has filed a new cross-complaint against Pitt.
sister sister Yesterday at 5:59 p.m.
Dune: The Sisterhood Casts Its Founding Mothers The HBO shows tracks the spicy beginnings of the Bene Gesserit.
remembrance Yesterday at 5:00 p.m.
Loretta Lynn Was Fearless She created a world where women had permission to tell their truths.
By Marissa R. Moss
memoirs Yesterday at 4:50 p.m.
7 Revealing Stories From Constance Wu’s Memoir, Making a Scene Including sexual-harassment accusations on the set of Fresh Off the Boat and why she sent those tweets.
music notes Yesterday at 4:02 p.m.
A Tour of the Tolkien Lore in the Rings of Power Score Courtesy of series composer Bear McCreary.
vulture lists Yesterday at 4:00 p.m.
The Best Books of 2022 (So Far) A few novels, a transcendent memoir, and an old Greek tale to enjoy by the fire.
let's go lesbians Yesterday at 3:38 p.m.
Oh, Velma’s Taking It (She’s gay.)
rip Yesterday at 3:22 p.m.
Charles Fuller, Award-Winning Playwright, Dead at 83 He earned a Pulitzer Prize and Tony Award for A Soldier’s Play.
honky tonk angel Yesterday at 2:25 p.m.
Dolly Parton, Miranda Lambert, Reba McEntire, and More Honor Loretta Lynn “I wouldn’t even be making country music today if it weren’t for Loretta Lynn,” Margo Price wrote.
comedy review Yesterday at 1:56 p.m.
Welcome to Hasan Minhaj’s Inspirational School Assembly In The King’s Jester, the comedian’s boldness gets packaged into a too-slick presentation.
By Kathryn VanArendonk
overnights Yesterday at 1:30 p.m.
Ramy Season-Finale Recap: It’s Maktoub Who among us hasn’t eaten a pork hot dog by mistake?
yikes Yesterday at 1:14 p.m.
George R.R. Martin’s Co-authors Are Not Fit to Post Rise of the Dragon co-author Linda Antonsson has repeatedly critiqued the casting of people of color on Game of Thrones and House of the Dragon.
overnights Yesterday at 1:00 p.m.
Ramy Recap: Dogs Are Haram The men are going through it in this episode.
More Stories