The ‘90s are the new ‘80s. Just ask any streaming subscriber wending their way among recent reboots of era-defining series — like Saved by the Bell, Full House, Twin Peaks, Beverly Hills, 90210 and even Animaniacs — or those who are just now discovering the originals behind the recent revivals.

If there’s a through-line cutting across primetime TV during the 20th century’s ultimate decade, it’s the medium’s — ahem — growing pains from evolving out of broad formula into more specialized programming. It’s a period that started with the winding down of stalwart family comedies like, well, Growing Pains (see also: Family Ties, Facts of Life, Who’s the Boss?) and crowd-pleasing procedurals a la L.A. Law (further viewing: Miami Vice, Magnum, P.I., MacGyver et al). It concluded with millions sending off the self-absorbed nihilists populating Seinfeld and indulging in Sex and the City’s raunchy voyeurism while glued to The X-Files’ existential drama and waiting restlessly for the latest Sopranos whacking.

But in retrospect, ‘90s pop culture was, by and large, a last gasp for uncomplicated nostalgia. Revisiting it can act as a balm amid the crowded landscape of contemporary content and coarseness of our mass communication.

Enter QuikTrip: the Tulsa, Oklahoma-based gas station and convenience store giant known for serving up satisfying and affordable bites while people stop to fill up their tank. It may have been founded in 1958, but the company has its finger on the pulse of people’s sentiment for the simpler sustenance of what kept us glued to our tubes 30 years ago. (Or they’ve simply done astute market research, which is admirably canny in its own right.)

After rebranding its in-shop selection of eats and treats (think pizza, sandwiches, soft serve, and more) as snackles in 2019, QuikTrip set about cementing the term — defined as “part snack, part meal” that can “satisfy any craving at any time” — as a cultural buzzword by producing a sitcom of its own. The result, directed by SNL’s Paul Briganti, is a pastiche of gently parodying homages to many of our favorite ‘90s shows that duly conveys how characters from any era would be wowed by consuming their preferred snackle. But specifically, it surfaces all the warmth and fuzzies we get from thinking about the programming we grew up with — your must-see TV, your TGIF block, and the laugh-tracked days of yore we’ve long since left behind. Here are some of the ‘90s beats that Briganti and his cast and crew covered to perfection. 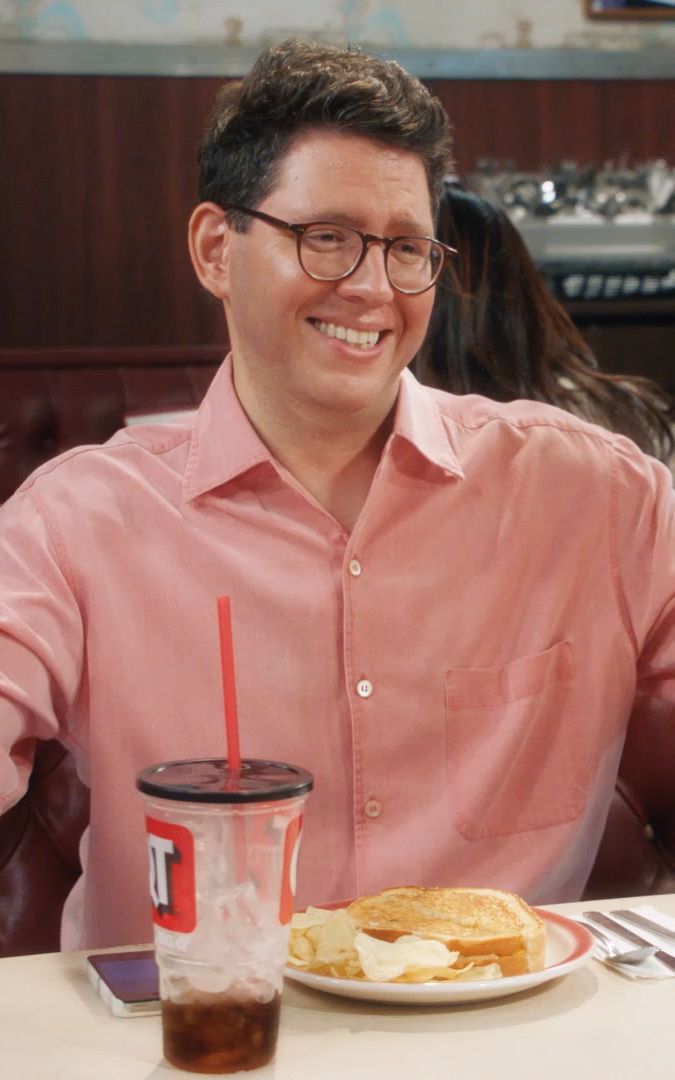 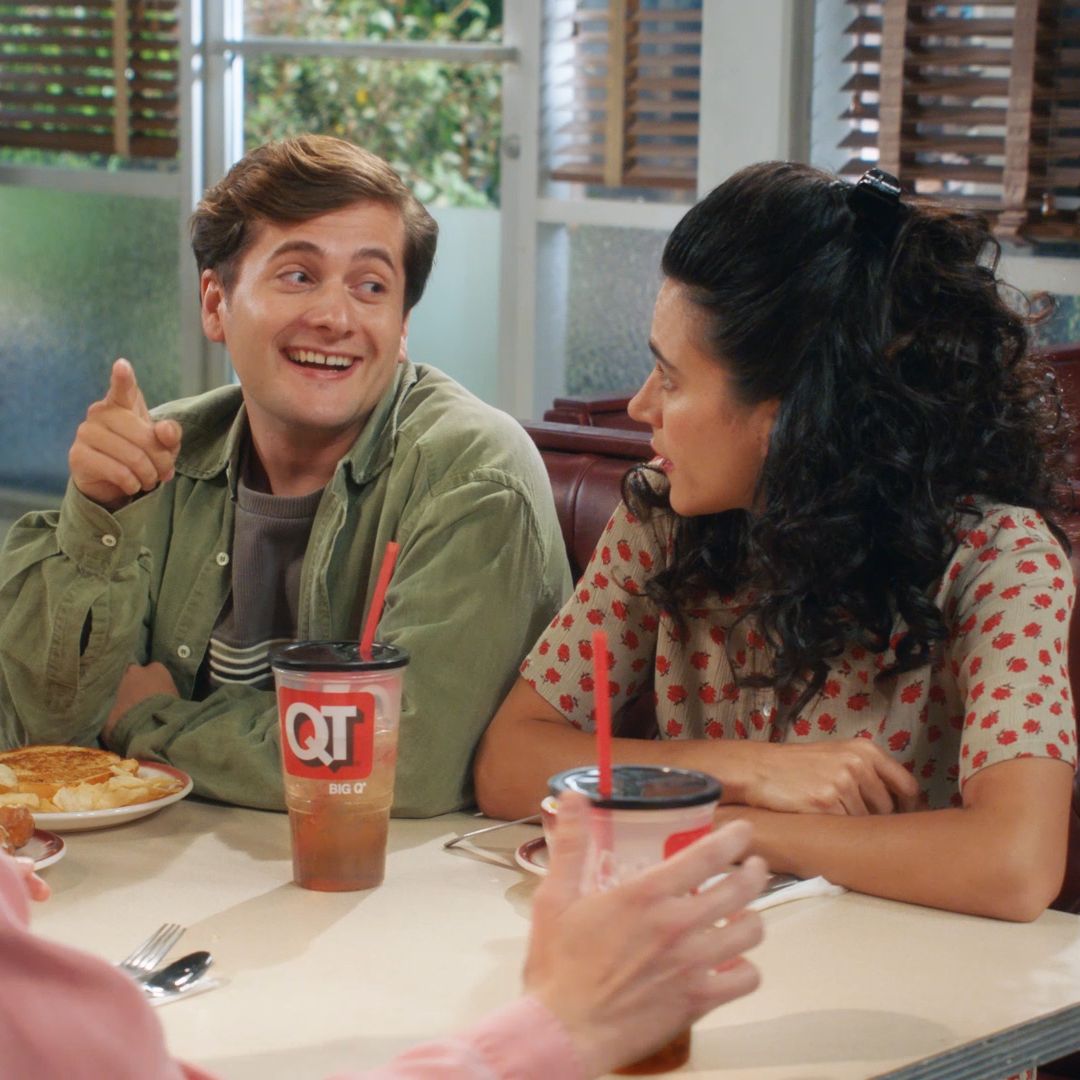 Every ‘90s series was recognizable by a core cast of protagonists who each modeled a singular archetype. They were, in effect, boy bands for the small screen. QuikTrip’s sitcom sends up TGIF in one fell swoop by introducing a dopey dad in his best father-daughter, heart-to-heart sweater who gets lightly lambasted by his wisecracking wife and lunkhead brother-in-law; the sassy, preternaturally mature youngest daughter; her teen sister Amy, who’s rightly mortified when the clan grills her football-captain beau Sean (who cringingly professes he’s the “carbon” to Amy’s “monoxide”); and an exasperating, nerdy neighbor who chronically misconstrues genuine wariness for cozy rapport, before ultimately knocking into Sean, getting an oversized snackle soda all over the place and deadpanning, “Did I spill that?”

Swaths of ‘90s kids can still recall the corny puns that defined so many Saved by the Bell titles. QuikTrip’s sitcom scribes were loath to overlook this finer point. Hence, a segment satirizing a high school sitcom (you know the one) dubbed “Hungry for Love” that centers on a pair of familiarly archetypal teen heartthrobs fantasizing about sharing romantic plates of taquitos and sub sandwiches with the prettiest girl in school. Or the harmless alliteration of “Snackle Snafu,” which headlines the TGIF skit. And if you watched a certain show with six friends, you might have your own favorite “The One When….” “The One With The Mayo” takes a page from two beloved ‘90s sitcoms, both in title and form: In this case, the show’s overly analytical malcontent is verklempt that his latest date doused a pretzel snackle in the rich white condiment, rather than mustard or basically anything else. Quite the twist, indeed.

Those laugh tracks we alluded to earlier? They were a holdover from the earliest days of in-studio sitcom recordings, often imposed on final cuts of shows that were filmed before no one except cast and crew. The idea was to keep things flowing and fill any dead air, but as the QuikTrip trope-slicer reminds, there’s something to be said for natural rhythm. Behold, as a quasi-crowd of onlookers breaks into uncontrollable hoots and cackles when the group’s token cut-up eccentric quips in “The One With the Mayo” that his friend is “a little salty” over all this pretzel talk. Or the stereotypical student-athlete in “Hungry for Love” elicits off-camera adolescent yuks after lamenting that his pal’s worries about her driver’s test are “driving me nuts.” A standing O is deserved for the actors’ wholly appropriate over-emoting under Briganti’s direction.

We only get little outro bits throughout the QuikTrip tour of sitcoms past, but that’s kind of the idea. The earworms composed for half-hour shows back then were so infectious that all you needed were a few chords and a catchphrase for them to cling in consciousness for life. Proceed with caution, because the mildly distorted three-chord rocker that reels us into “Hungry for Love,” wrapping with a punky female vocal declaring, “We are going to Snax!” might just blot out all those other ‘90s sitcom soundtracks that have been lodged in your brain like a hellish, endlessly looped mash-up since your middle school days. Ditto how the clipped, blue-eyed-soul assurance that with snackles, “It’ll be alright” kicks off “Snackle Snafu” and makes you realize that, all these decades later, we’re all still asking, “Whatever happened to predictability?” Touche, QuikTrip. Touche.

a long talk 20 mins ago
The Man Behind Netflix Comedy’s Curtain Robbie Praw explains his approach to buying stand-up specials for the streamer.
By Jesse David Fox
vulture 10x10 20 mins ago
The Comeback Puzzle 3-Down, Seven Letters: “Bust a Move” rapper.
rev up your engine 11:40 a.m.
How Top Gun’s Famous Volleyball Scene Led Kenny Loggins to the ‘Danger Zone’ The story behind the film’s hard-charging anthem, as told by the king of ’80s soundtracks.
under oath 10:11 a.m.
Kate Moss Denies Ex Johnny Depp Pushed Her Down the Stairs The trial is nearing its end.
summer preview 9:00 a.m.
13 Animated Films and TV Shows We Can’t Wait to See This Summer The Belchers and Buzz Lightyear hit the big screen, while South Park continues its streaming-special blitz.
By John Maher and Eric Vilas-Boas
the group portrait 8:00 a.m.
Not Your Father’s Paris Review The storied magazine has a new editor, a new staff, and a new vibe.
cannes 2022 1:58 a.m.
Julia Roberts Says There’s No Way Her Movie With George Clooney Is Good “It’s probably going to be terrible.”
kellyoke 12:48 a.m.
Kelly Clarkson Invents Extended Plays by Announcing the Kellyoke EP She’s happier than ever with the song choices.
timelines Yesterday at 10:30 p.m.
Everything That Happened on This Is Us in Chronological Order Six seasons of twisty family drama, untwisted.
By Maggie Fremont
post grad jobs Yesterday at 10:19 p.m.
Dr. Taylor Swift May Visit Grey’s Anatomy for a Checkup Fans noticed Swift’s name in the IMDb credits for an upcoming episode.
overnights Yesterday at 10:02 p.m.
This Is Us Series-Finale Recap: A Regular Saturday This Is Us offers a reassuring handhold and a longing stare out a car window as it bids us farewell.
tragedy Yesterday at 8:55 p.m.
CBS Pulls Tonight’s FBI Season Finale After Texas Tragedy The episode’s plot involved preventing a school shooting.
close read Yesterday at 6:41 p.m.
The Winds Have Shifted for Jimmy and Kim on Better Call Saul Visual cues and callbacks illuminate the dark implications of that shocking ending.
crypto bros Yesterday at 6:35 p.m.
Seth Green Gets Scammed Out of His Show’s Main Character A Bored Ape Yacht Club NFT named Fred …
walkouts Yesterday at 4:56 p.m.
Why Did Sasha Banks and Naomi Walk Out on WWE? And what is going on with this corporate statement?
summer preview Yesterday at 4:50 p.m.
What Summer TV Experience Are You Looking for? Return to the ’80s, fly alongside a dragon, or travel to the cosmos — your couch plans are set with summer’s new and returning series.
comics Yesterday at 4:29 p.m.
‘Hunter x Hunter’ Creator Mysteriously Joins Twitter, Teases New Installments A cryptic tweet from Yoshihiro Togashi surprised fans after his four-year hiatus.
chat room Yesterday at 4:00 p.m.
Patrick Fabian on Walking Into the Violent Half of Better Call Saul “It took my breath away on the page.”
By Ben Rosenstock
summer preview Yesterday at 4:00 p.m.
29 Plays and Musicals We Can’t Wait to See This Summer Indoors and outdoors, uptown and down.
women Yesterday at 1:38 p.m.
Casting Directors, Behold: Anne Hathaway and Zendaya Their Paolo Sorrentino–directed ad deserves to be a sexy lesbian thriller.
More Stories