If you feel like our screens are flooded with reboots and remakes, it’s because, well, they are. Deeply loved shows and movies from decades past are regularly being reintroduced as they approach their notable anniversaries. A 90s classic all about navigating dating in New York City is back, a new family of 12 is navigating life (and budgets) as a dozen, and yet another parent is telling their teenager all about their journey of finding love. Let’s face it, we love to see how characters and storylines have changed and grown with us.

Find them at your local retailer.

These reboots and reimaginings don’t just live on the screen though, they exist even in our pantries. Take, for example, the newest Goldfish cracker: Mega Bites. The bigger, bolder, and cheesier reboot of the classic cracker has made its debut, and people are running to their go-to store shelves (both in-store and online) for the flavorful snack.

The new crackers, available in robust Sharp Cheddar and spicy Cheddar Jalapeño, are meant to be savored. But before we dive into what exactly makes these new crackers different, let’s take a look back at how it all started.

Swimming through the years

During a trip to Switzerland in the 1960’s Margaret Rudkin, the founder of Pepperidge Farm, discovered the small fish-shaped crackers. Originally created by Swiss baker Oscar J. Kambly as a birthday gift for his wife — her astrological sign was Pisces (often represented by two fish) — the unique crackers were something Rudkin was determined to bring back to the United States. After back-and-forth discussions, the cookie manufacturer and Rudkin came to an agreement: the Goldfish crackers were hers to take back with her.

In 1962, the first five flavors — Lightly Salted (what we now know as “Original”), Cheese, Barbecue, Pizza, and Smokey — were introduced. Goldfish were intended to be served with cocktails and in soups, but quickly became a staple in pantries. By 1988, their popularity had skyrocketed enough to have NASA bring them aboard the Discovery Space Shuttle. In 1997, the Goldfish’s signature smile was added, officially making them the snack that smiles back. 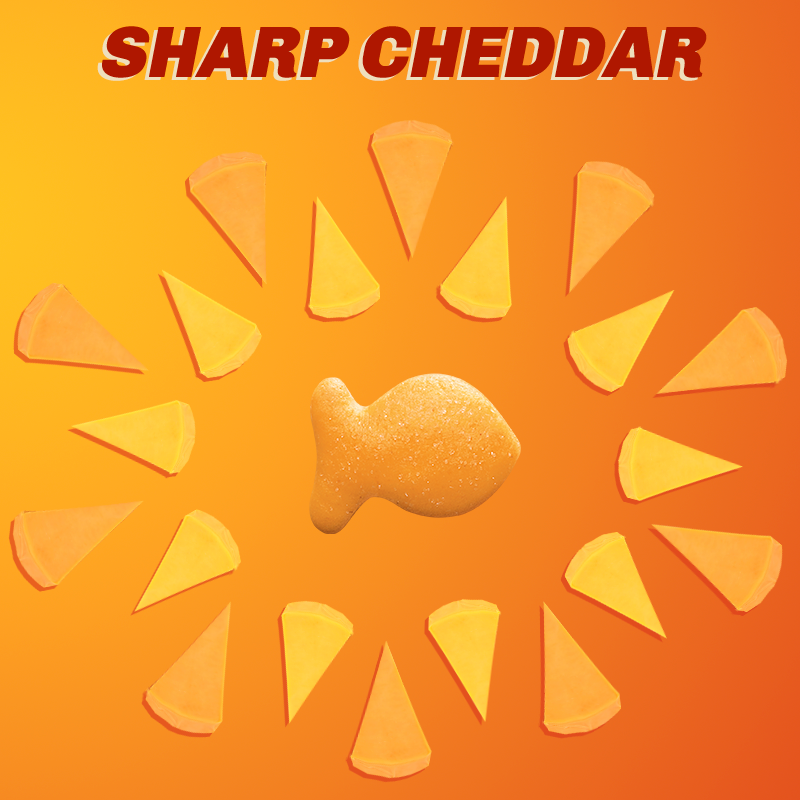 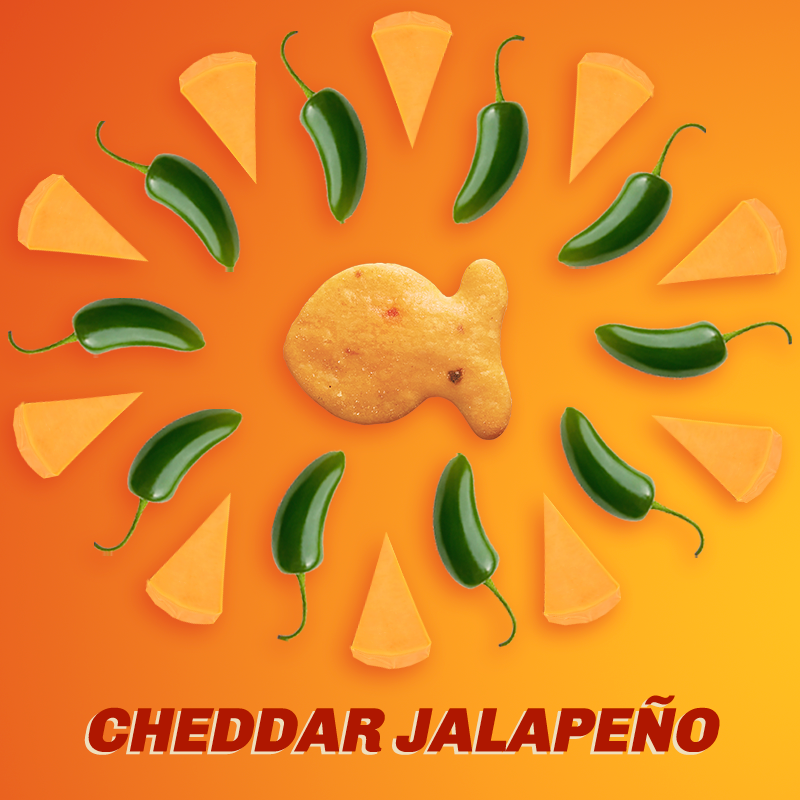 Now, nearly 60 years after the tiny crackers made their debut state-side, there are more than 20 different variations of the beloved snack. This January, the newest member of the Goldfish family was introduced: Mega Bites.

The new Goldfish are 50 percent bigger and feature bolder flavor profiles (Sharp Cheddar and Cheddar Jalapeño), creating a craveable snack any cheese-lover will adore. It’s easy to see a reboot as something that comes around to replace the originals, but that couldn’t be further from the truth for these crackers. The Sharp Cheddar and Cheddar Jalapeño Mega Bites pack a strong punch when it comes to flavor, texture, and size. Rather than replacing the originals, they complement the staple snacks. They’re here so Goldfish lovers have even more to enjoy.

Can’t get enough of the Goldfish Mega Bites? Join the conversation on Twitter. By completing the sentence: “NEW Goldish Mega Bites are cheesier than _____ #CheesyReboot #Sweepstakes” (simply fill in the blank) you can be entered to win a year’s supply of the new snack. Visit the official rules page to learn more about the #CheesyReboots sweepstakes. NO PURCHASE NECESSARY, open to legal residents of the 50 US States (+DC) 19+, ends 3/31/22.

+Comments Leave a Comment
All About Goldfish Mega Bites

summer preview 9803 seconds ago
36 Albums We Can’t Wait to Hear This Summer From Lizzo to Maggie Rogers.
By Michelle Hyun Kim
overnights 16 mins ago
The Kardashians Recap: Cover Girls The glamorous life leaves the Kardashians wanting more.
theater 25 mins ago
Encores!’s Into the Woods Will Have an Encore on Broadway Sara Bareilles’s Baker’s Wife will return, alongside some newcomers.
overnights 9:30 a.m.
Hacks Recap: Girlbosses Go to the Fair A warmer, fuzzier episode explores Deborah’s regrets about choosing her career over everything (and everyone) else.
appreciations 9:30 a.m.
The Standard-Setting Beauty of Live in Crenshaw Lil Rel Howery’s 2019 stand-up special shows that when a special looks distinctive, the comedy feels that way too.
By Kathryn VanArendonk
overnights 9:00 a.m.
The Flight Attendant Season-Finale Recap: Suspicious Minds Despite the chaotic pace and occasionally incomprehensible narrative, Cassie’s journey had an emotional core that kept us coming back for more.
'and it's all true...' 9:00 a.m.
Where Does the Abortion Thriller Go From Here? Movies like Happening turn the terrible consequences of restricted access into the stuff of dramatic tension. Are they trying to do the impossible?
By Alison Willmore
overnights 12:44 a.m.
Survivor Season-Finale Recap: A Weird, Wonderful Ending The finale provides a feel-good ending to a stellar season of Survivor.
last night on late night 12:37 a.m.
The Tonight Show: Jon Hamm Always Commits to the Bit From “Hamm & Bublé” to this Tonight Show clip.
overnights Yesterday at 10:45 p.m.
The Real Housewives of Beverly Hills Recap: The Dark Crystal Crystal is at her breaking point.
very special episodes Yesterday at 7:48 p.m.
Stop Asking for a School-Shooting Episode of Abbott Elementary Just watch the Glee episode instead.
trial run Yesterday at 6:27 p.m.
Josh Duggar Sentenced to 12 Years in Prison He also has to pay a $50,100 fine.
my single is dropping Yesterday at 6:02 p.m.
Sky Ferreira Didn’t Forget, Drops First Single in More Than 3 Years “Don’t Forget” is the latest offering from her long-delayed second album, Masochism.
a long talk Yesterday at 6:00 p.m.
Sky Ferreira Has a Lot More to Say About her new single “Don’t Forget,” her delayed second album, and still feeling restricted.
By Justin Curto
protests Yesterday at 5:58 p.m.
Ukrainian Filmmakers at Cannes Protested Censorship of Russian ‘Genocide’ The team behind Butterfly Vision played air-raid sirens during the demonstration.
this month in comedy podcasts Yesterday at 4:18 p.m.
This Month in Comedy Podcasts: Getting Older With Marina Franklin and Bevy Smith Rounding up our favorite comedy podcast episodes of the month.
viewing guide Yesterday at 4:03 p.m.
The Best and Worst of Love, Death & Robots Volume 3 Netflix’s experimental animated series is back, serving up its signature blend of sci-fi, horror, and comedy.
britney's peers Yesterday at 3:02 p.m.
Idol Britney Spears Met Up With Sam Levinson and the Weeknd Who just so happen to be co-creators of HBO’s The Idol.
chat room Yesterday at 3:00 p.m.
Steve Earle on No More Tribute Albums and His Complicated Nashville Legacy “There are a lot of people in Nashville that blame what they’re doing on me. Some complain I’m the reason the drums are too fucking loud.”
cannes 2022 Yesterday at 2:41 p.m.
Both the Kids From Squid and the Whale Brought Coming-of-Age Tales to Cannes Seventeen years after The Squid and the Whale, both of the children from that film have brought their directorial debuts to Cannes.
By Nate Jones
More Stories